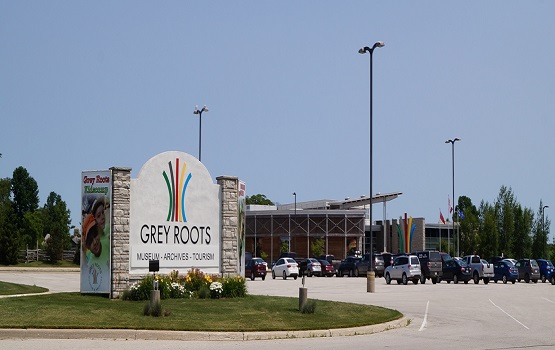 Grey Roots Museum & Archives has grown and developed into a unique facility from the County Museum's beginning in 1955 and the later establishment of a County Archives in 2000 in order to promote and preserve the heritage of Grey County.

Initial interest for a Grey County Museum began by the forming of a committee to establish a museum project, displaying borrowed artefacts in a temporary space. A permanent home became realized in 1959 by the work of the Grey County Historical Art Society and the purchase of a church building in Owen Sound followed by the official opening of an Art Gallery and Museum accommodation.

With the growing expansion of both the museum and archives, the County acted to bring together both facilities. The new and current facility, Grey Roots Museum & Archives, which also includes Grey County Tourism, had its grand opening on June 18, 2004.
Today the facility continues to grow with the development of a Heritage Village and the acquisition of both museum collections and archival materials.

Material for this history was derived in part from a speech given by Viola Bothwell at the Museum's 50th anniversary in 2005.