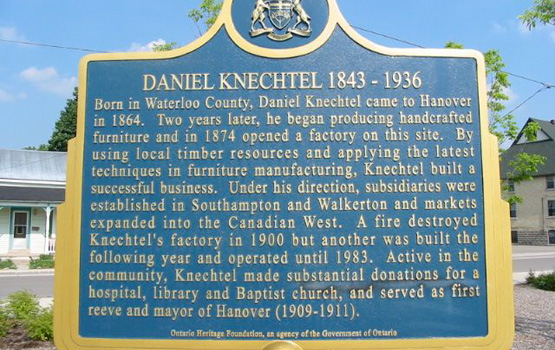 Born in Waterloo County, Daniel Knechtel came to Hanover in 1864. Two years later, he began producing handcrafted furniture and in 1874 opened a factory on this site. By using local timber resources and applying the latest techniques in furniture manufacturing, Knechtel built a successful business. Under his direction, subsidiaries were established in Southampton and Walkerton and markets expanded into the Canadian West. A fire destroyed Knechtel's factory in 1900 but another was built the following year and operated until 1983. Active in the community, Knechtel made substantial donations for a hospital, library and Baptist church, and served as first reeve and mayor of Hanover (1909-1911).