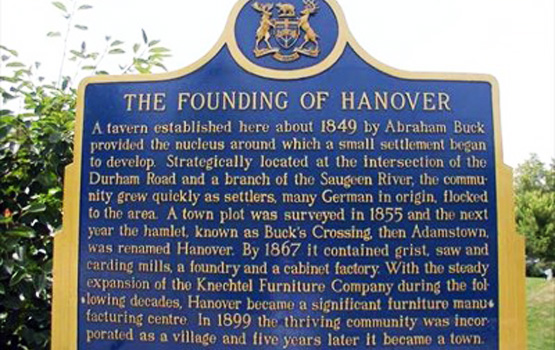 A tavern established here about 1849 by Abraham Buck provided the nucleus around which a small settlement began to develop. Strategically located at the intersection of the Durham Road and a branch of the Saugeen River, the community grew quickly as settlers, many German in origin, flocked to the area. A town plot was surveyed in 1855 and the next year the hamlet, known as Buck's Crossing, then Adamstown, was renamed Hanover. By 1867 it contained grist, saw and carding mills, a foundry and a cabinet factory. With the steady expansion of the Knechtel Furniture Company during the following decades, Hanover became a significant furniture manufacturing centre. In 1899 the thriving community was incorporated as a village and five years later it became a town.