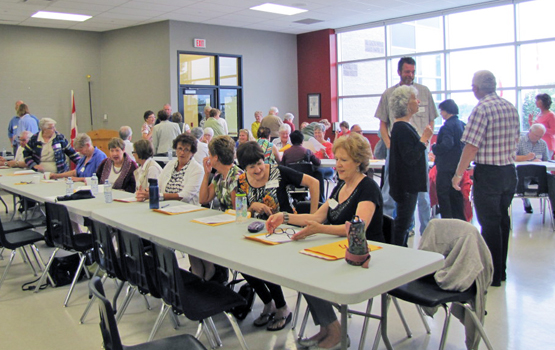 PROBUS is a local, national and international association of retired people who come together in non-political, non-sectarian, non-profit, autonomous clubs which provide regular opportunities for members to meet others in similar circumstances, with similar levels of interest, make new friends and maintain and expand their interests.

The Hanover Area PROBUS Club had its foundation meeting in September 2014 with an attendance of 125 interested people. At the October meeting we had 136 people officially register as Foundation Members. As of  June 2016 our club has grown to 198 members.

The Hanover Area PROBUS Club draws its members from a wide area including Hanover, Walkerton, Durham, Neustadt, Mildmay, Ayton, Elmwood, Ripley, Owen Sound, Markdale and many points in between.
An elected Management Committee is responsible for the oversight of the club and it meets on the first Tuesday of each month with the exception of July and August.

The General Meetings of the club are held the 2nd Wednesday of each month (July and August excluded) in the Lions Den at the P&H Center (or virtually). The meetings begin at 10:00 am and are finished by noon. An informative and interesting guest speaker is featured at each General Meeting.